Press Release by Forum on report of consultant.

The Forum of BSNL Unions/Associations has called upon the Employees to organize massive demonstrations on 12th August against the M/s Deloittee Committee report recommending retrenchment of more than 70,000 employees, engagement of executives on contract basis, reduction of SSAs from 334 to 167 and concentration of power at Circle (State) level, resulting in deterioration of services. The social obligation of the government to provide universal service is given a go-bye and restructure is suggested on the basis of revenue only, that too erroneously.

The retrenchment of thousands of workers and induction of executives on contract basis is recommended based on the wrong propaganda that the increased wages of employees are the main reason for the loss of BSNL. But the fact is that for the last four years, there has not been any increase in the total wage bill. On the other hand, it has been reduced due to the retirement of 10,000 – 15,000 employees every year. Even with one lakh more workers, BSNL was reaping huge profits up to 2009 – 2010.

The loss to BSNL has been due to the reduction in revenue from the earlier Rs.40,000 crore to Rs.26,000 crores within these years, which happened mainly due to non-procurement of equipment like mobile lines, cables, Broadband modem, drop wire, telephone instruments etc. It is also to be noted that BSNL Management is canceling requests for landline telephones stating that there is no feasibility to provide them.

The Forum of BSNL Unions / Associations have been crusading for the last many years to provide a better service to the customers, but which has been stone walled by the Govt. and Management by not procuring necessary equipment. The top level Management, mostly ITS officers on deputation from govt., and not absorbed in BSNL, are casual and least interested on the growth of the company.

The report of the Deloittee consultant is prepared in tune with the neo-liberal policy being implemented by the govt. to weaken and privatise the telecom PSUs. One of these, Videsh Sanchar NIgam Ltd. (VSNL), has been handed over to Tata years back. It is in this context that the Forum of BSNL Unions / Associations have given call to organize massive demonstrations against the anti-BSNL, anti-worker report on 12th August, at Corporate Office, Circle & SSA levels.


Forum demands the Govt. and BSNL Management to outrightly reject the report and start discussion with the Unions / Associations to improve BSNL and it’s services.
No comments:
Labels: FORUM 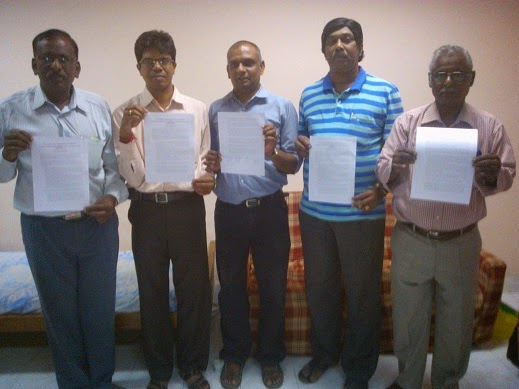