Decisions of the Forum Meeting held on 26th June 2013
A meeting of the Forum of BSNL Unions / Associations was held on 26th June 2013 at the BSNLMS office. Com. Islam Ahmad presided. Com. V.A.N. Namboodiri, Convener briefed the meeting about the activities after the last meeting.
The disaster in Uttarakhand:
1. The meeting expressed its deep grief and condolence to the more than 1,000 people killed due to the savage floods and landslides in Uttarakhand. Many more are feared to be killed. Thousands are still stranded and in danger. The meeting conveyed its heartfelt condolences to the families of the bereaved people.
2. The Forum meeting appreciated and expressed its thanks to the Military (including Air Force and all defence personnel) for the continued efforts to save the stranded pilgrims, tourists and local population round the clock, without even considering their own safety. Already some of these army personnel have sacrificed their lives to bring the stranded to safety. The Forum condoled the death of these brave hearts who are the pride of the country.
3. The meeting unanimously decided to donate one day pay to the Prime Minister's Relief Fund for helping the people affected by the Uttarakhand disaster. The Forum requested that the amount be deducted from the salary of the employees. (It is expected that the donation will come around Rs. 40 to 50 crore.)  The Forum has also suggested that an advance by BSNL be immediately given to Relief Fund, without waiting for the collection.
4. The Forum urged the BSNL Management to make all efforts for the immediate restoration of the BSNL services in the state. Our employees have been doing their best to restore the services, even working 24 hours. The Forum requests the management to make available all required equipment for the restoration. Forum wants the management to immediately take necessary steps to assist the BSNL employees who have been affected due to the disaster both in Uttarakhand and those tourists/ pilgrims from other circles.
5. The Forum requested DOT to financially support BSNL in its efforts to restore the services in Uttarakhand. This will help BSNL which is in a weak financial position.
All India Convention on 'Revival of BSNL'
The Convener reported about the action taken in the matter so far. The Mavlankar Hall is being booked for 3rd August 2013 for holding the Convention. Senior TU leaders / Members of Parliament are being invited to address the Convention. All India Unions have been allotted the number of delegates to attend the Convention. Other preparations are being made.
No comments: 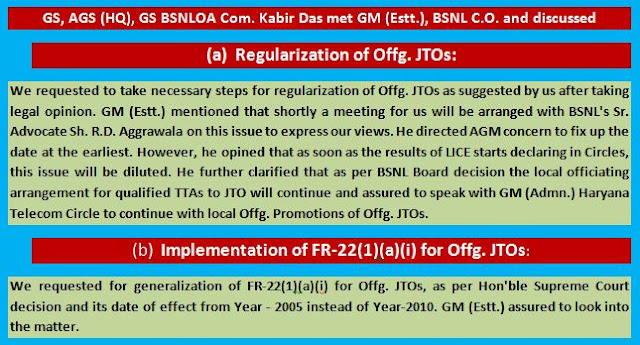 CONGRATS TO ALL TRAINEES! 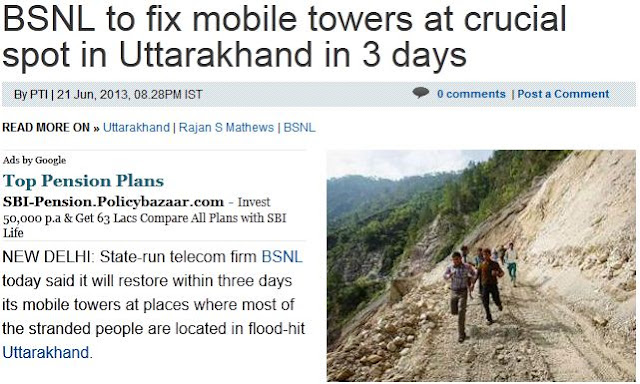 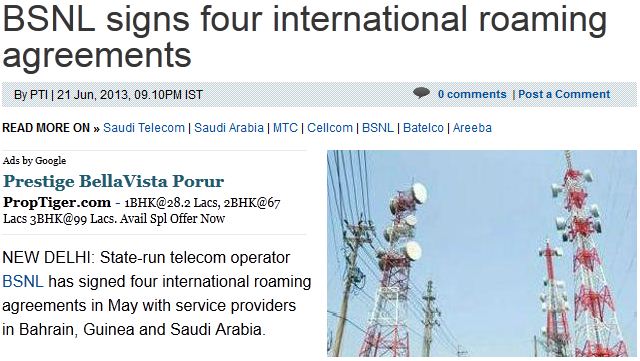 SUBSCRIBERS BASE AS OF MAY 13 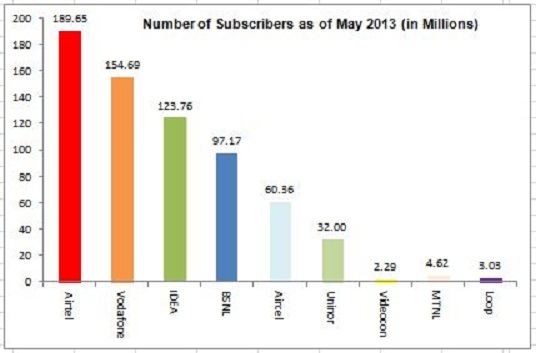 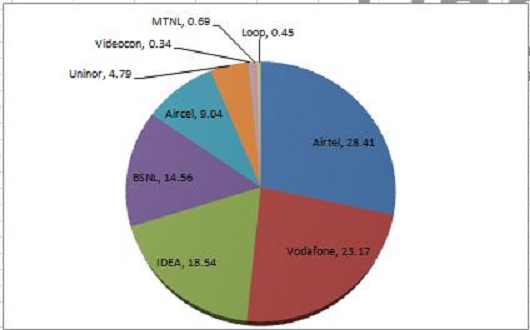 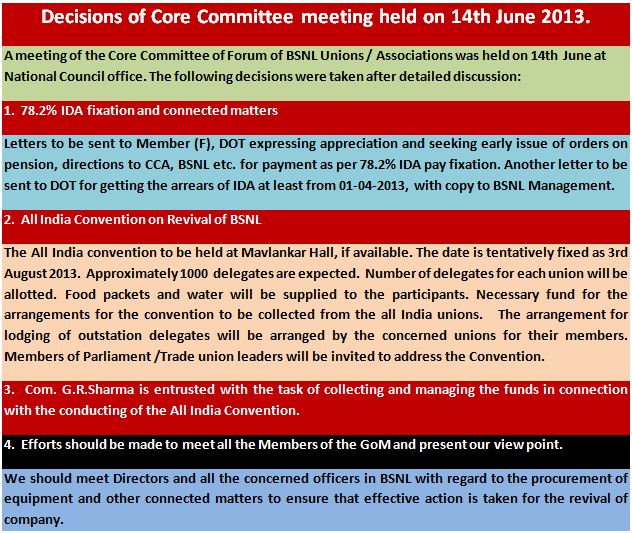 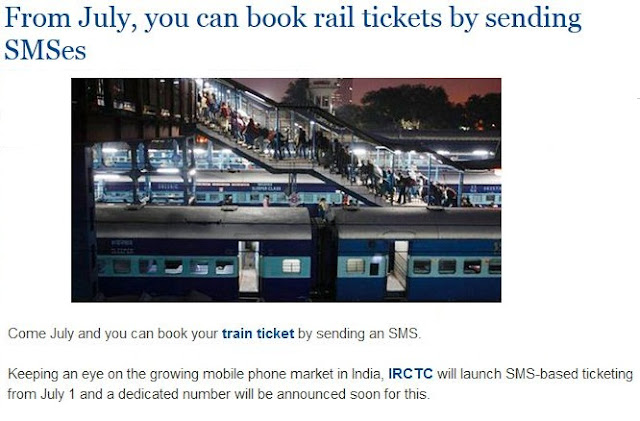 The benefit on 78.2% is furnished in the file linked below. The calculations are illustrative since they are made on straight annual increments assuming 6 to 7 increments would have been earned. There will be slight variations when upgradation intervenes. 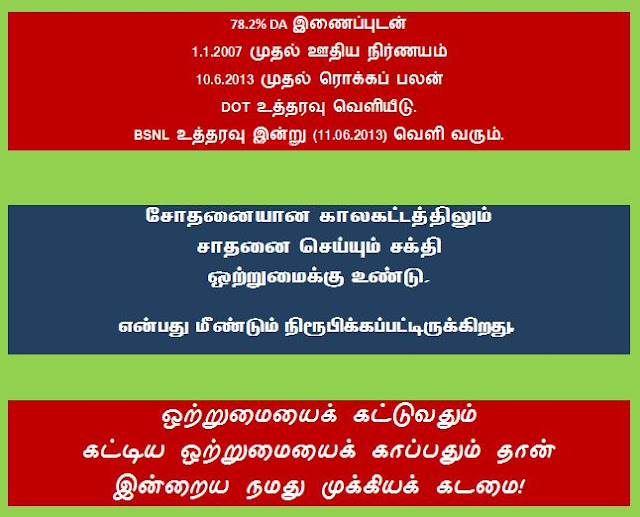 
10.06.2013: Implementation of 78.2% IDA Pay Fixation Case
GS contacted concern officers in DoT on implementation of 78.2% IDA pay fixation of DPE OM dated 2nd April, 2009 as approved by BSNL Board. It is understood that Hon'ble MOC&IT has approved the proposal for implementation today morning and sincere efforts are being made in DoT for issuance of Presidential Directives immediately. The orders are expected today itself from DoT & BSNL. Further developments in this regard will be intimated soon.
No comments:
Labels: CHQ NEWS 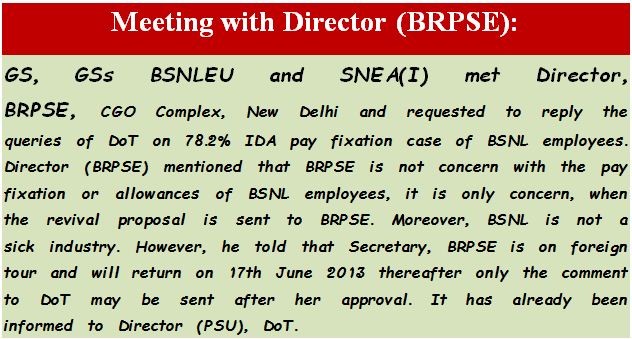 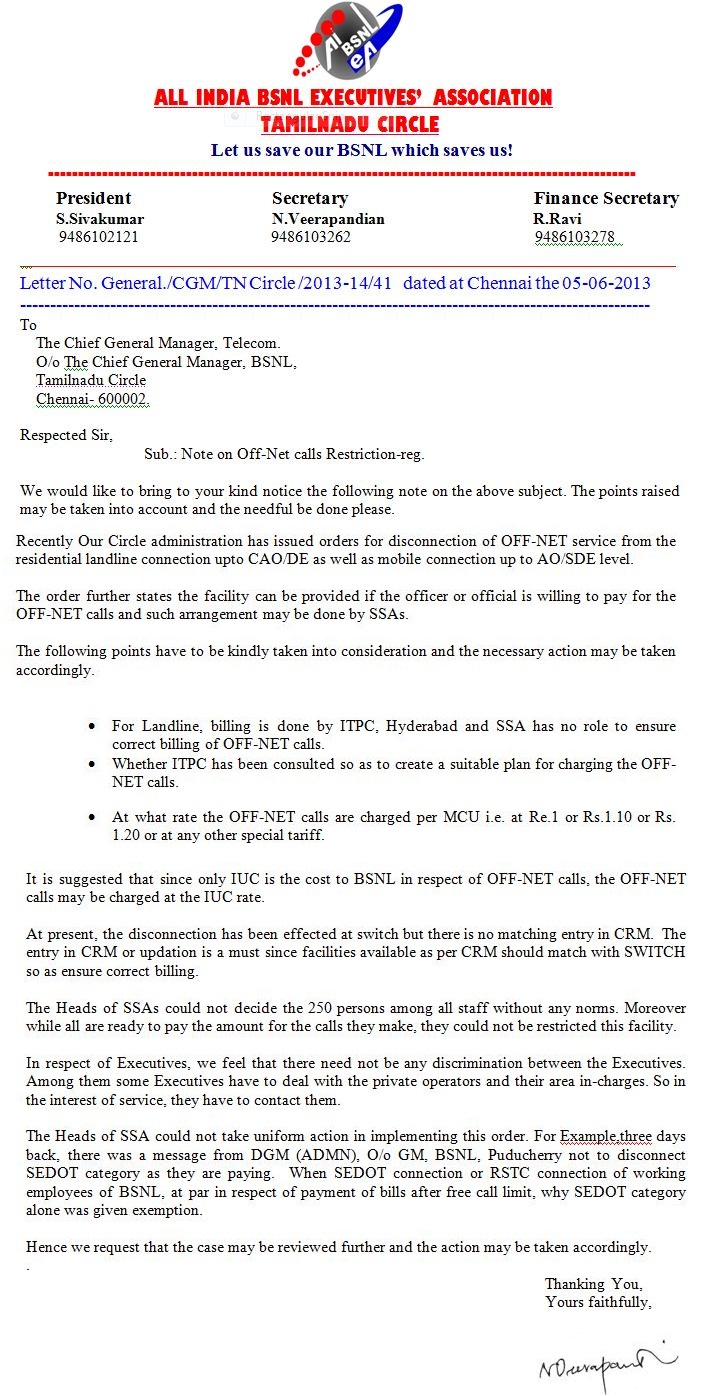 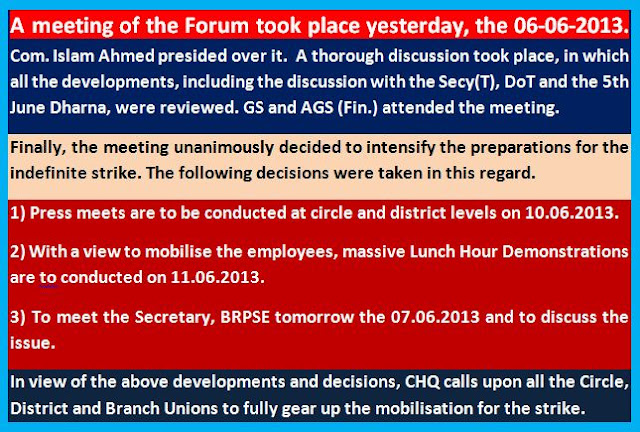 <<<< Change of role of Telecom Commission on cards>>>